What Others are Saying

What Others are Saying about Captioning Videophone 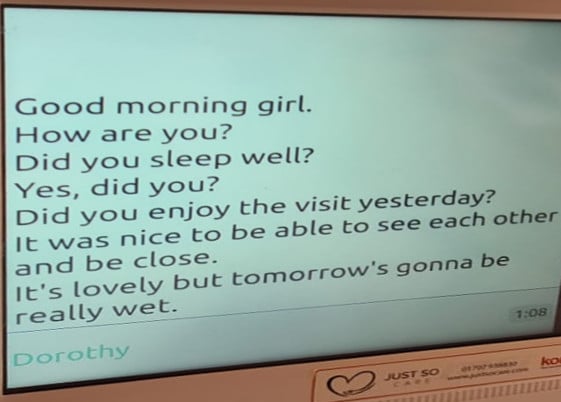 I just wanted to let you know what a huge difference it has made to all our lives.

What a massive difference! The connection is instant, the picture clarity is really good – and because Rodney is profoundly deaf, the subtitles are an incredible help.

Rodney is so clear… the difference it has made is incredible! 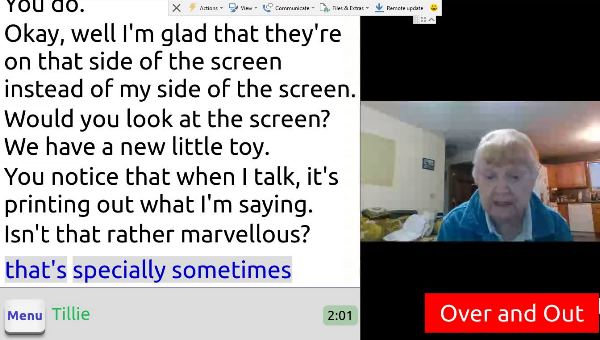 What a wonderful day we have had… it’s almost like visiting my husband’s room in the nursing home… we’ve had virtual breakfast, lunch and dinner together. He has been visited by some of his friends and I’ve been able to thank staff who have come into his room. I love to dial in and see that he is sitting peacefully which makes my day more peaceful too… THANK YOU for this wonderful gift during this otherwise stressful pandemic.. It has exceeded my expectations.

It saved my bacon

I was told by a doctor friend some years ago that I was a disaster area.

I thought that that was laying it in a bit thick but lately I have begun to think perhaps he was right.

Tonight a connection at the back of my bidet came apart and water began pouring everywhere. My weak hands could not push it back together and I was standing in more and more water. Eventually. Getting no response from ringing my emergency bell repeatedly I remembered where the water cock was just outside my door. Turned it off and the water began to recede but was dripping down through the ceiling of the unit underneath. Half an hour after I started signaling that I needed help someone appeared saying she had been asleep and had to get dressed.

I felt like asking her if she was sure she’d remembered her ear rings but managed not to. Someone contacted the manager of the retirement complex in which I live and she sent a plumber who has only just now, at nearly 1am, departed, having fixed the fault that caused the problem .

I am still sloshing about though on a very wet carpet. I’ll be off to bed now

After giving my Konnekt an approving pat for saving my bacon again.

Just as well I’m not an early sleeper.

No doubt the morrow will bring hordes of helpers again and heavy expenses.

Don’t hold your breath before the next exciting episode.

Sent from Mail for Windows

Grandmother Lily from Finchley, North London is in her 90’s and lives with a hearing impairment that affect her ability to communicate over the phone. She has been very keen to stay in touch with family and friends whom she hasn’t seen for a long time due to her health and COVID restrictions. Like so many older people she has family in various places at distance, including Norway.

This video was made on day 1 of trialing our Konnekt Captioning Videophone.

Here’s what she has to say about it.

My mother started using the Konnekt Captioning Videophone around 12 months ago and it is has proved invaluable.
Mum has less than 5% hearing and relies on a hearing aid and cochlear implant.  The Konnekt allows her to lip-read the conversation as well as receiving the captions.

Mum now has severe dementia and has moved to an aged care facility. The Konnekt videophone moved with her and the setup was seamless, aided by the wonderful support from your team.

Despite her dementia Mum finds the videophone easy to operate, and it is a great way for her to stay in contact with immediate family. We could not be more thankful for this device.

I don’t think there is a cake that could hold 93 candles!

When Mum has had difficulty understanding something important the nurses are trying to tell her, they have even called her on the Videophone while in her room so she can read the captions to make sure she understands.

We even did the annual medical review over her videophone. It was great. I could see the RN and my mother and they could see me. Amazing.

Today is Mum’s 93rd birthday and because of Covid restrictions I wasn’t able to go to Canberra to celebrate with her, but I phoned her just now and sang Happy Birthday. It was so wonderful to see her face as she told me about the party the Pines gave her and see the gifts people had given her.

It was so lovely to be able to share in her happiness in such a direct way.

Thank you so much Konnekt, I can’t imagine how we would have managed this very difficult time without you.

— Carin (daughter) in QLD Australia for Mum in Deakin ACT. 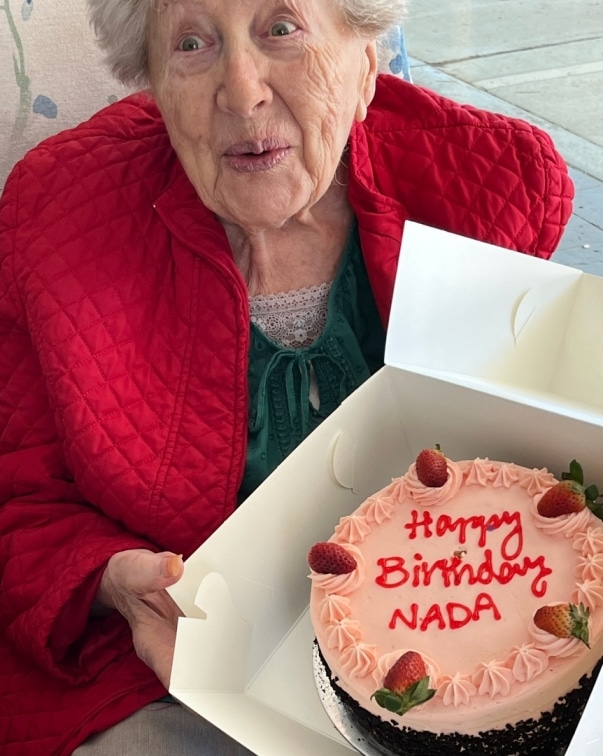 I can’t thank you enough for the Konnekt Videophone. It has been such a blessing to our family.

I first heard of it back in early 2020 and was so happy to be able to talk to and see my elderly mother who is deaf and lives alone in Canberra while I live on the Sunshine Coast in Queensland. Mum had only had the videophone for a few weeks when Covid struck. What a relief for us to be able to contact her and see how she was. She got used to it very quickly and could call me whenever she wanted. We speak most days, sometimes only for a couple of minutes, other times for half an hour or so. This is made possible because of the captions which are great most of the time as Mum can’t hear at all now. We laugh when Skype doesn’t quite catch what I’m saying and Mum gets a weird word or two. Occasionally the captions don’t work, I think because of internet weakness, but then we can still communicate as Mum can read my lips because she can see me. I am so happy to see and hear her. Mum has loved being able to call anyone on her list so easily, with just a press of the button. She had been feeling very isolated when she could no longer use a regular phone.

In September last year Mum had a bad fall and decided to move into Aged Care so of course the Videophone went with her. We had a few glitches at first but Konnekt was readily available to sort out the issues.

It’s been great as often when I call, one of her carers drops in and I get to meet them too and I see their kindness to my mother. Such a comfort as I am so far away.

Just a quick note to let you know the device and service provided by Konnekt has been absolutely outstanding, incredibly professional all the way but also friendly and supportive.

This service has meant that many of us were able to stay in contact with my Grandmother through these very challenging times when a lot of us couldn’t travel to see her in person.

It brought a smile to her face every time she could see one of the Great Grandkids on video and they her. Really a big thank you to you and the whole team.

This product is essential for my severe hearing impaired mother to stay home and be connected  . She had a crack in the screen and within 6 hours they rebuilt her personalized device.  We were able to replace it for her within 24hrs. Service from this Staff and company it beyond anything we can imagine,  the relief mum had to have a new screen was precious.

Thank you Konnekt and your team, we are indebted to you.

This device has given her independence and connection. 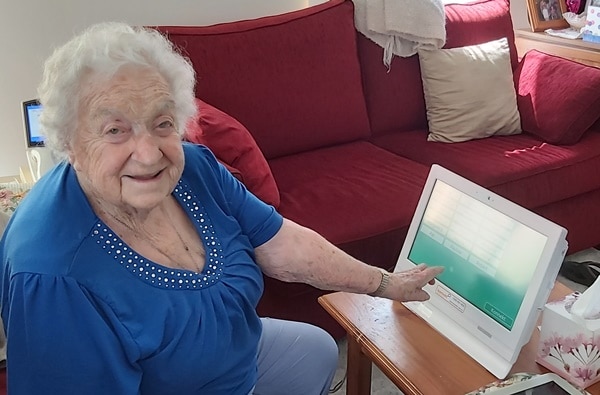 <The Konnekt Captioning Videophone> is the best thing that has ever been invented!

Hear how Chris’s mother, with severe hearing loss, used Captioning Videophone to talk to family and friends — with captions and, during video calls, lip reading too.