Konnekt is a wholly Australian-owned company that develops and sells a ground-breaking video telephony product and service worldwide to help you, your family and friends stay connected and feel safe. 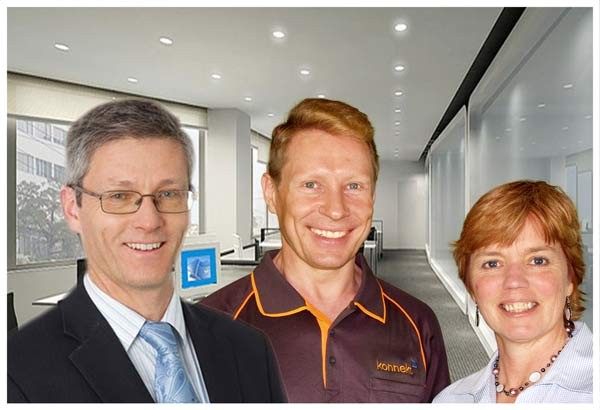 Our head office is located in Melbourne but Konnekt has a presence throughout America, Australasia and Europe by virtue of its network of sales and support partners.

Our Videophone hardware is sourced from one of the largest global manufacturers. It’s robust, reliable and built to our specifications.

Before Konnekt started, a couple of us were trying our best to be fantastic children. Like most seniors, our Mums and Dads stayed in their own homes because they were comfortable, they knew their neighbours and they liked their local shops. Eventually, they moved into retirement villages or aged care.

Time with family is priceless

We loved to visit them and when we did, we’d laugh about the old times, they’d see how their grandchildren were growing, and we’d take them out somewhere special. Sometimes, we arranged a taxi — or a plane trip — and we brought them back to our own homes for a visit.

John and Karl – Our Story

Unfortunately, life was busy. That hasn’t changed. Even though our parents had carers such as nurses and home help, and even though they went on outings with their church groups, lawn bowls clubs and local council activity groups, they were lonely… and social isolation is dangerous for health. They wanted to see us and spend more time with us. Of course, they’d rarely say it because they didn’t want to be a burden. We’d telephone them often, but it wasn’t the same. They couldn’t see us smile, and so it was much harder to make them smile. It was hard to tell whether they were happy or just trying to sound brave.

Sometimes we couldn’t tell whether they were sick or just had a croaky voice because we interrupted their nap. Sometimes we called when they were in the bathroom or busy in the kitchen, and we worried like crazy when they didn’t answer our calls. Worst of all, one of our Mums sometimes had trouble sleeping and got her day the wrong way around… so she would wake up from a nap at 5pm, eat breakfast, stay awake for hours, and then miss her appointments the next morning. It drove us crazy with worry. There are only so many times you can call neighbours to go bang on the door or peak into the windows. There are only so many times you can drop everything and visit parents in the middle of a weekday.

Video calling… how hard can it be?

Each of us independently hit upon the idea of video calling! Skype, Facetime, Messenger apps… how hard could it be? We set up PC or Mac computers, laptops, and eventually tablets for our Mums and Dads. We installed video calling apps. We got them an Internet service with Wi-Fi. We showed them how to call us. And we installed video apps on our own computers and mobiles. Well, we soon found out how hard it can be! We soon found out the many reasons why most seniors — and even most young adults and kids — don’t use video calling apps.

Even before the cruel shade cloth of dementia slowly invaded our parents’ minds, they had trouble with technology. It was frustrating. If we had to put a cost on the time we spent trying to solve problems, trying to re-teach them, trying to cope with so-called “easy” operating systems and “free” apps, we each could have paid for a dozen plane tickets!

First, there were the hardware and software problems: Computers would crash and catch viruses. Apps would stop working after updates. Icons mysteriously moved or disappeared, or were somehow dragged to trash. Hard discs and memory cards became unreliable and had to be replaced.

Laptops and tablets never seemed to be charged — so we couldn’t video-call just when we most needed to — and even when they were charged, they’d be left somewhere in the house that had poor Wi-Fi or couldn’t be heard to ring. It became a chore: We’d try video-calling their laptop or tablet first, then we’d call our Mum or Dad by phone, then they would scramble about the house looking for the tablet and the charger. Eventually we’d call them back, and they’d switch on the charged tablet and start the video-calling app.

The quality never seemed to be great… and it was for SO many reasons. Sometimes, the Wi-Fi wasn’t strong enough at the chair where they sat down. Sometimes they’d be out of Internet data (and the Internet would be throttled) because one of the other relatives used it all up during the last visit. Sometimes, they’d get tired holding the tablet, and put it down facing away from their faces. And the screens, cameras, speakers and microphones that are built-in to even the best tablets are tiny…

… but if we plugged in external cameras and speakers, the neat cables would eventually turn into a mess of wires, the plugs would be pulled out, and the connector pins (especially on USB connectors) would become bent from being pushed in the wrong way, or pushed into other sockets.

Hard to see, hard to hear

The screen on 10-inch tablets was just a bit too small to see comfortably from Mum’s “favourite chair”, and the tablet itself would constantly fall over or be knocked from its stand. The volume from the tinny little speakers was too soft during the call, and when we called, it was much too soft to hear it ringing from the other side of the house!

As our parents grew older, it became even harder for them to use iPads or tablets. The hand-eye coordination needed to use apps such as Skype or Facetime, to select the right contacts, to cope with the unexpected pop-ups… the myriad of configuration options that could be inadvertently set incorrectly… and accidentally using a pinch or swipe gesture or a long-press instead of a single touch. Frustrating! Oh, and their PC apps were just as troublesome: they would right-click the mouse occasionally, resulting in totally unwanted and unexpected faults, or they would drag/drop instead of click-once, causing the icon to move or disappear into the trash folder. Their old computers seemed to get slower after every update. We often heard ourselves saying, “please turn it off and then on again!” when we were about to give up.

Sometimes, it was our fault. For example, sometimes, we would forget to charge our own tablet, or turn our computer off, or forget that we had terminated the video-calling app on our mobile. Sometimes, we’d forget to move to a room with good Wi-Fi, or forget to configure our mobile to connect via Wi-Fi. So when our parents did try to video-call us, well… we weren’t on and there was no backup, and so our parents would learn not to bother with video calling. They would call us by phone instead… and when we asked them to switch to video calling, it was just too much of an effort to hang up and start again.

Eventually, the many bad experiences caused them to dislike the video calling. No amount of encouragement would make them want to try again.

Then one day, we met. We talked. We found that each of us had the same problem! We realised that our Mums and Dads — and probably many other people’s Mums and Dads — really needed a simple and reliable product, with great quality hardware, custom software, professional installation, with all services included, and with great support so that the family didn’t have to be “the IT Guys”.

So in 2013, we assembled a team… and that’s when the real Konnekt story started!

In 2019 we went global. Videophone is unique, as reliable as your old toaster, and selling across America, the UK and Europe, Asia and Africa. We’ve yet to ship one to Antarctica. I think the penguins there are waiting for our waterproof version?